[As The New York Times notes, the United States has been at war continuously since the attacks of 9/11 and now has just over 240,000 active-duty and reserve troops in at least 172 countries and territories. While the number of men and women deployed overseas has shrunk considerably over the past 60 years, the military’s reach has not. American forces are actively engaged not only in the conflicts in Afghanistan, Iraq, Syria and Yemen that have dominated the news, but also in Niger and Somalia, both recently the scene of deadly attacks, as well as Jordan, Thailand and elsewhere. An additional 37,813 troops serve on presumably secret assignment in places listed simply as “unknown.” Source et plus. 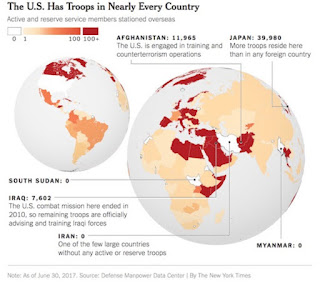