Todd, I was born during the depression, 1938, and don't really remember it. However I remember so many stories that my Dad told and the stories of the others who sat around the pot bellied stove at the local country store near the farm I grew up on.
And I must disagree with Ghung, above, who suspects that because we are so close to facing our own doom, that we are more prone to see the world as being doomed. Actually I am far more optimistic than many doomers. Some may call me a wide eyed optimist but I believe there will be survivors ;-)
Actually I have been a doomer since my late 20s when I began reading lots of non-fiction books on nature, history and scientific subjects. And I became more hardened in my doomerism as the years rolled by. I have seen the population of the world triple in my lifetime. That, in itself, should make anyone pause and contemplate the trajectory humanity is taking.
And since I am a science and nature reader I know what is happening to the world. Everything is going from bad to worse. Water tables, because of irrigation are dropping in China and India by meters per year and almost that much in the rest of the world. Forest are disappearing, deserts are expanding, ocean fisheries are disappearing, species are going extinct. And of course I could go on and on but you have heard it all before. And I didn't even get around to declining fossil fuel.
And the cornucopians say... "but the world population will level off at about nine billion." That is truly absurd. Seven billion people are destroying the earth and they think it will just be all okay if we can hold the population to nine billion? We will never make it to nine billion, not even close.
Ron P. 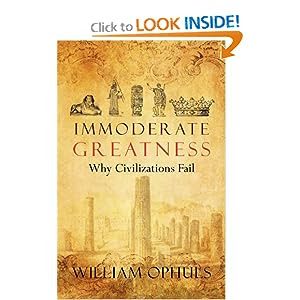 Civilizations are unnatural accumulations of wealth and power that cannot be sustained over the long term. Insuperable biophysical limits combine with innate human fallibility to precipitate eventual collapse. Any one of the factors discussed above would suffice to sicken a civilization. All of them together are lethal, because each exacerbates the rest. Decline and fall are therefore "overdetermined"---that is, the product of a multiplicity of causes tending toward the same effece. As Gibbon said, instead of asking why Rome fell, "We should rather be surprised that it had subsisted so long."

The time frame is less than two years: the world becomes net energy negative. At that point there is no turning the clock back.