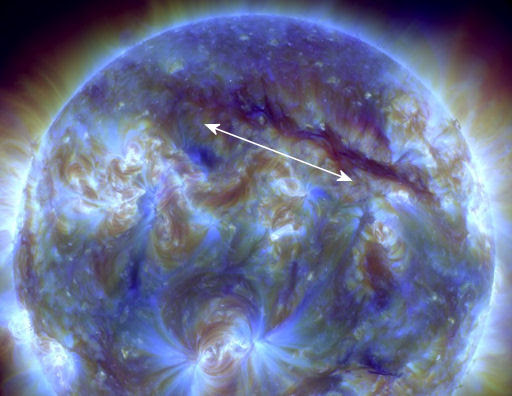 It’s one of the biggest things in the entire solar system. A dark filament of magnetism measuring more than 800,000 km from end to end is sprawled diagonally across the face of the sun. NASA’s Solar Dynamics Observatory took this ultraviolet picture of the structure during the late hours of Nov. 17th.
If the filament becomes unstable, as solar filaments sometimes do, it could collapse and hit the stellar surface below, triggering a Hyder flare. Indeed, part of the filament already erupted on Nov. 16th, but Earth was not in the line of fire. A similar event today would likely be geoeffective because of the filament’s central location on the solar disk. (SpaceWeather)

Two new  Sunspot groups are now rotating into view on the eastern limb. One of them in the southern hemisphere is currently producing C-Class flares. Sunspot 1348 which was the source of two M-Class flares, is now on the western limb and out of direct earth view. The source of most activity today thus far has been Sunspot 1346, which has produced countless C-Class flares. A small C6.0 flare took place around this region at 07:27 UTC Thursday morning.
Two new Sunspots did rotate into view on Thursday morning, and there is probably a few more spots still to come in the northeast quadrant. These regions are currently producing C-Class flares. (SolarHam)